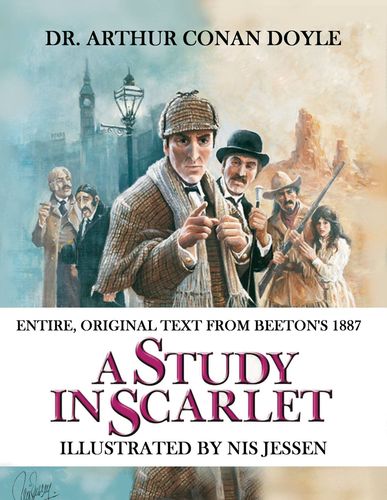 A Study in Scarlet

Find ud af mere
Beskrivelse
The artwork in Nis Jessen's new version of "A Study in Scarlet" is based on - and selected from - his massive book (weighing 2 kilo and with 625 illustrations) that was published in 2005.

This version is created as Nis Jessen's tribute to Sir Arthur Conan Doyle's genius that gave the world 125 years of intelligent and meaningful fictitious reading in at least 84 languages.

Nis Jessen invested 8 years in research and artwork at his drawing table to show the most authentic atmosphere of Victorian London, hansom cabs, gaslight - with other words: Sherlock Holmes' world - but also the early Mormon settlements at Salt Lake City, Utah.
Forfatter