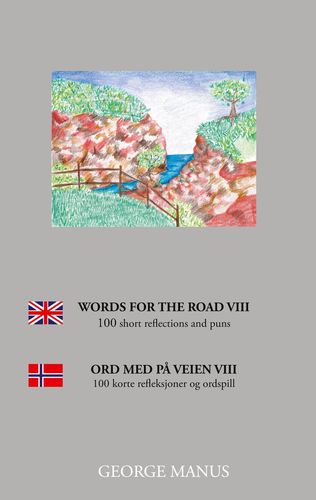 Words for the Road VIII

Find ud af mere
Beskrivelse
This WORDS FOR THE ROAD VIII, the eight in a row, I have dedicated to "Does it really matter"? and like the others given the subtitle: 100 short reflections and puns.
The so far 900 words for the road are expressions of spontaneous opinions and thoughts when they were put on paper.

Some of them the reader will find obvious while others could have been shaped differently or not be included at all. But, in between there may be some one will take notice off and some that give an afterthought. If so, my purpose for them is achieved.

The reflection "Does it really matter?", written in 1994, which is copied from the book REFLECTIONS I, is about the written word. Hardly anyone in my class was worse than me when it came to Norwegian spelling. One thing is to write grammatically correct, something else is to write so that the wished-for meaning becomes clear. Read the reflection "Does it really matter"? from page14.

As in the previous WORDS FOR THE ROAD, the table of contents is presented in alphabetical order in both English and Norwegian. In the book the English comes first, with the corresponding Norwegian next to it.

If you get the feeling you`ve heard some of them before, I can assure you it has never been my intention to plagiarize.
Forfatter