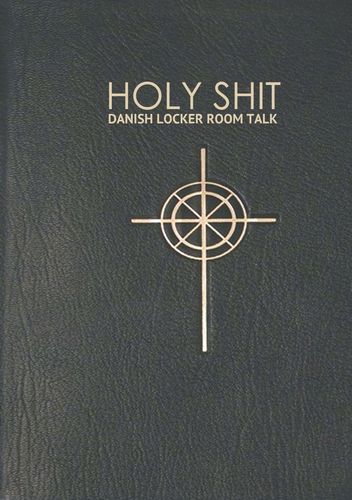 If the 'brown debaters' are still the most preferred representatives on the bestseller list, it is possible, that this work is contesting position status. In the best gospel style, it is Achmed Ezra, one of the twelve disciples, who ask questions.

However, fiction is stated loud and clear.

The formerly successful architect Achmed, sitting years after the financial crisis, evaluating the result of his arrogant approaches to architecture and the industry, at a silence retreat with five other anonymous Danes in the Sahara Desert. Only wearing necessities such as food and water, paper and pencil will the participants be forced to self-examine in deep silence! Communication is shortened to short periods a few times a day. The exercises are many. Mental and physical. Nothing is sacred, even if freedom of speech seems threatened!

'One in three is not the biological father', statistics in the country report! The behavior of corporate princes for several decades, lives on in the best of success for generations after Frederick IX in the suburbs of the Capital of Culture. And long before the arranged marriage to the cousin in Sweden, our Muslim brotherland. 'We are all places!' Queen Ingrid as she only looked at her shoes for the past few years with a bow head!

The purpose is to entertain with an alternative cultural understanding guide for refugees and immigrants, who come to Denmark. Achmed is being challenged everywhere from his surroundings, which he is told to describe! The proud Palestinian tries to follow the advice of his good friends, who range from the guide in God's language - Silence! And the gay humanist with royal blood, flushes his genetically predisposed behavior across his relationships, and continues in this translation from the 'New Testament', including Joseph, who has almost lived a monastic family life with his Catholic Mary.

This book follows the characters' journey to a more solid human being in their self-exploration in the wilderness, where they meet in the short periods and have conversations! Sometimes they seem to hallucinate and comment on something, which is undeniable.
They have no digital remedies in the desert! And the ten days as a starting point, were from the beginning relative!

KING OF DENMARK:
But yesterday I got so much cock - three big dicks - three guys in their forties, that finally I could barely stand on my knees!! I think, it lasted for 50 minutes!!

Are you nuts!?
Forfatter

The memory has always played ALx S tricks. A writer with a professional background in architecture, specialization in science and for over a decade has been a leading architect based in Aarhus.

He was rewarded for proposing a relocation of the old main library to DOKK1. And later became designer of i.a. Cerespark's local plan, where he hasn't been, since he turned the first strokes into a master plan. ALx is a resident of the area. The same goes for Salling and Music House expansions, Symphonic and Rhythmic halls, as well as many other houses and areas, which he has also not seen with great pride; since it was just a drawing.

All that rain forest! Not all drawings became evenly handsome, though they prevailed. There are countless examples of this in the whole country, but especially in the hometown of City of Smiles. With the exception of the winner in among 140 nations as best new construction in 2016, AU-Botanical Greenhouse, which he also designed for only 30 dollars per hour for the largest and oldest architectural firm in Denmark. Here he illustrated with the pencil in his right hand. The remaining approx. forty large houses and urban areas, which have ALx S's signature in its architecture, stand only as a faint reminder of an artist, who could not keep up with the development. Due to an arm injury using a mouse, he has been drawing with his left hand in recent years. It activated the right hemisphere, which is less visual, and more sound and words interested!

'And often you had your hands tied on your back, so you had to draw with your mouth, or your feet in 3D! "A drawing can't always describe everything - You know two thousand words, say more than one picture!!'

ALx has then chosen to stay in a silence retreat for extended periods of time without human contact in the hidden.

'With the Co2 consumption that may be due to some strokes, that I have drawn with my French curves and got started, I have learned to be quiet. Otherwise, it could have a big impact on some surroundings, I don't know off. It would require at least 20 earths with those thoughts!!'

He stays in the Sahara Desert to develop new crystals, but opens up as "evangelists" for leaps and bounds in history - The days of the monarchy are spoken in Denmark. 'The Times Up' wave has long since entered, and someone got pregnant before Margrethe number two was in any cast - of the purest Gold.

By the same author: The King of Denmark, the Newest Testament, The Prince of Pride a