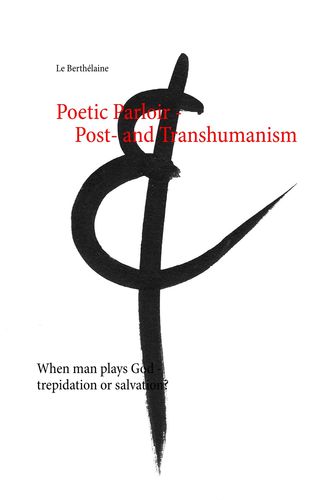 Post- and transhumanism are to most people new areas of interest and therefore, when they encounter these discourses, they have only a slight understanding of the problematics in question and the serious conse-quences the new bio-tech era inevitably will entail.
The intention of the present trilogy on post- and transhumanism is thus: to give an introductory account of the matters and questions in play in a comprehensible way, so that the trilogy will be informative and enlightening, both to newcomers and those already familiar with the topic.
At a first glance, post- and transhumanism undeniably have a futuristic aura; hence, if one were to speak of such an era, it would be one belonging to the future or merely a sci-fi scenario. Nonetheless, this is not the case, and several critics in the field argue that we, in fact, already live in a post- and transhumanistic age. A conviction Poetic Parloir endorses or, at least, the view that the biotech revolution is unstoppable, urgent and pending. And certainly, the view that it will have a great impact on humankind and human existence, changing our understanding of what it means to be a human and to live a human life; a decisive influence that demands our moral attention, as the new bio-techniques evolve at a far higher pace than moral and ethics can keep up with.
Poetic Parloir is unique in how it introduces the pending era, as it often bases itself on popular as well as acknowledged literature, art and film, together with perspectives of philosophy, religion and science. Spheres, of which the reader may have a good foreknowledge and understanding. This will facilitate the comprehension of the sometimes complex post- and transhumanistic issues.
Certainly, new times are pending, some say the promised land, the Millennial Kingdom from the Book of Revelation. I say, it is a rabbit hole, and we are invited, whether we like or not, with Alice, either into the wonderland of utopia or the gloomy wasteland of dystopia. It needs our attention.
Dear reader, I hereby give you Poetic Parloir [part I] on the topic of post- and transhumanism. Yours to read, yours to roam - yours to revel in.
Forfatter

Scholar educated at the universities of Aarhus, Odense and Copenhagen, Denmark.

Le Berthélaine has conducted extensive studies in the field of medical science as well as the humanities, the liberal arts of aesthetics, literature and philosophy. And this cross-disciplinary fusion characterizes the poet`s sharp pen and inciting style.

- the Soul and body problem
- Existentialism
- Post and transhumanism
- Reality

Political correctness is of no concern to Le Berthélaine; he has an ardent devotion for the free reflection and speech - la parole libre!


English publications:
art essay:
# »The Work of Art in the Digital Age - the pixel and painting« (2012)