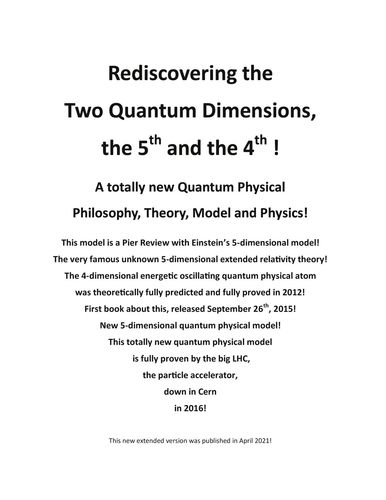 Rediscovering the Two Quantum Dimensions, the 5th and the 4th dimension!

Find ud af mere
Beskrivelse
Late in 2016, the scientists, with a little help from the big LHC, the particle accelerator down in Cern, finally concluded that there are no physical particles to be found inside this universe!! Meaning only energetic oscillating fields was to be found!

Can you even grasp that thought, that everything in this universe, is absolutely anything but being this postulated 3-dimensionally and fully physical universe, that you thought you could understand, and that you have been educated in?

Everything you believed this universe to be, does not exist at all!! You don't find anything inside this universe, that is only 3-dimensional and only fully physical! And everything you did not believe in, is the universe we actually live inside, with only energetic oscillating fields! We live inside a paranormal universe with 5 very active quantum physical dimensions!

It is actually these two quantum physical dimensions, the 5th and the 4th, that really runs the show! We can only see, discover and detect this universe inside the 3rd dimension, and that dimension is "the quantum physical screen" of the universe! This is where the Higg's field is operating with the funny universal stuff, a stuff that can be there, disappear and reappear again!

That leads us into the stealth technology and the physics behind the famous stealth plane, the new 5-dimensional quantum physics! The only kind of believes, and the only kind of education today, lies inside this 3-dimensional and fully physical standardized big bang model and physics, and all of that is a big lie! That was the final conclusion from the big LHC down in Cern!

This very famous and shocking discovery actually proved my new 5-dimensional model, by proving the energetic oscillating quantum physical atom, that lies in a 5-dimensional spacetime.

This new model matches Einstein's extended relativity theory and can be understood as a Pier Review with Einstein's 5-dimensional model. It explains the gravity, the differentiated expansion, explains the very big inflation, and many more hidden secrets of the universe!
Read about the Author, and the book, and understand how this universe was created and how it functions!
Forfatter

My name is J.E. Andersen, and I'm a Norwegian guy living in Denmark, and my age has passed the 60s, and I am an amateur physician in the big bang model, but I'm a "professor" in the 5-dimensional quantum physics.

I said goodbye to the false big bang model late in the 1970s! The reason was an out of body experience, that explained me that there are more to this world than we can see, discover and detect! I also said goodbye to the false physics, that only expresses one way to experience whatever this universe is made up of! Everything must be discoverable in the simplest way of measuring, whatever there is to measure, according the false standardized big bang model! But what about the rest of the universe that you cannot measure?

Can you by any means measure, see, observe or detect a quantum field, in any possible way? Can you figure out to measure the "weight" of that quantum field, or measure the energy level in that specific quantum field? The answer is no to all of that, if you use the standardized model of physics, as your basic ground of knowledge!

I started on a hologram model in 1986, got the final details in 2012, and released the first book about this new 5-dimensional quantum physical hologram theory, in 2015.

Read the presentation of the book, for more information.