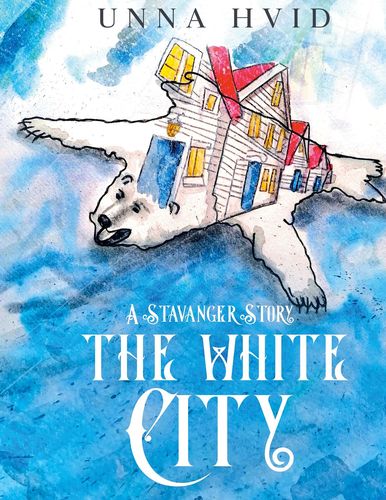 Find ud af mere
Beskrivelse
"The light from the windows leaves the man's face in shadow, but as he leans forward and gives me his hand in greeting, I feel a jolt inside me. His body is scarred with burns everywhere I can see. The hands, the arms, the neck, the face, the head. The scars on his face look like old Celtic tatoos that wrap themselves around the eyes, across the forehead and down over the cheeks and chin. If it had not been so gruesome, it would have been beautiful."

""Why would I visit museums when I have the whole of history written in my face? Can't you read it?" Suddenly the scars begin to move under my fingers, they become like little snakes and dragons staring at me with small eyes. They twist around Ragnvald's face and round my hands, up my arms. They hiss softly,incitingly, almost melodically. Ragnvald's black eyes hold my gaze, and I sense a burning behind them and in the room around us. I am spellbound."

The White City is a short story from Stavanger, Norway in both past and present. From the 12,400-year-old polar bear from Finnøy to the modern-day oil industry. Not forgetting "the ladies' man" of the Viking Age's, Harald Fairhair, who united Norway. The story is based on Stavanger's history and folklore and is inspired by sagas, folk tales, folk beliefs and museum exhibitions and publications.

Maybe the story also explains the city name, Stavanger, and the white colour of the houses?

"The White City" is the second volume in a planned series of modern folk tales from all the Nordic countries. Volume 1 with the title "The Salmon King" is from Gøtugjógv in the Faroe Islands. The series is published in English and Danish.

The series is colourfully illustrated by Unna Hvid
Forfatter